Bindweed is another problem weed that tends to get into well established plant formations. This weed has white trumpet-flowers and twines around other plant stems, smothering them in the process.

They are not easy to remove as they persist from a perennial root system. The roots are usually white and brittle and, if broken, are able to regenerate from the smallest sections. Like couch grass the roots need to be removed without leaving any of the root system in the soil. 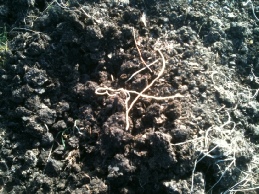 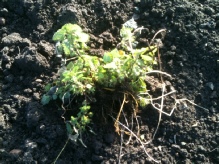 Nettles are one the least problem weeds in the allotment as they can be easily removed by pulling out the complete plant. Obviously make sure when you do this you are wearing thick garden groves as they do tend to bite. The annual nettle does not have long-lasting roots, but does produce very large numbers of seeds from an early age. They tend to relishes fertile soils rich in organic matter.