This country didn’t learn an important lesson from the First World War as far as food was concerned. Food supplies were under pressure throughout that engagement, not least because of U-boat blockades, and at one point in 1917 there was only enough food to keep going for a few weeks. We became more and more complacent about this in the 1920s and 193 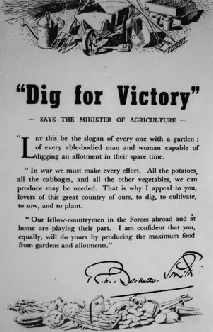 0s, despite Hitler’s rise to power and belligerent behaviour, so that in 1939 we imported 55 million tons of food, about three-quarters of the national total need. When war broke out again, the supply of food once more became critical to the nation’s very existence.

The Ministry of Agriculture decided that “something had to be done” in order to move significantly towards self-sufficiency in food. Officials came up with the Dig for Victory campaign, which encouraged anyone who could to dig up flower beds and bits of spare ground and grow vegetables. The Royal Family set a good example and gave up their beloved rose gardens to grow onions. Even Oswald Moseley, the interned British Fascist leader, tended a little vegetable plot within the walls of Holloway Prison. Dig for Victory was a very successful propaganda campaign, and by 1942 half of the population was joining in, some on newly established allotments, many adding to their calories with a pig or a small colony of rabbits.

An appeal to everyone during wartime to ‘Dig for victory' by cultivating vegetables for the good of the country and their own better health.

The tide of war was beginning to turn in 1942 in Britain's favour. However, German U-boats still threatened Britain's supply lines and saving food or growing more food was still very important.